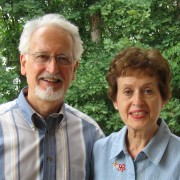 Ron and Patricia Owens have traveled the world for almost 50 years, gratefully serving where the Lord has opened doors for them. In North America they continue to minister in conferences, churches, seminaries and colleges. Their focus includes Ron’s preaching and teaching on the subjects of Worship and Revival as well as their joint ministry through music and composition. For a period of 10 years, Ron was Associate to Henry Blackaby in the Office of Prayer and Spiritual Awakening at Southern Baptist’s North American Mission Board, as well as being Worship and Music Consultant for the International Mission Board.

In more recent years, their overseas work was focused primarily on the lands of Russia where they have helped direct the training of worship leaders and musicians for the churches of Eastern Europe. Many of their songs, and their music dramas, Paid In Full and The Christmas Lamb, are being used in churches and theaters of the former Soviet Union where they are proving to be an effective tool in the sharing of the gospel. In 2003, performances of their musical, The Christmas Lamb, were used as a major outreach to the city of Moscow by the Billy Graham Evangelistic Association.

Ron and Patricia have been a collaborative team for many years. Ron writes most of the poetry for their songs and Patricia writes and arranges the music; however there are occasions when Ron provides some melodic material for their songs and times when Patricia provides some song lyrics. In addition to their collaborative musical efforts, Ron is a published author. He has produced two works on the subject of Worship, written several biographies and is currently working on additional writing projects.